The Weald Book Award celebrated its 8th year on Tuesday 1st March. Run by The Weald School it brings together a number of our current Year 7 pupils and Year 6 students from most of our feeder Primary Schools.

The Weald Book Award (WBA's) celebrated its 8th year on Tuesday 1st March. The WBA's brings together a number of our current Year 7 pupils and Year 6 students from most of our feeder Primary Schools. The Awards not only encourages students to read more, but also supports the transition process that prepares Year 6 students for life at The Weald.

This year, seven book titles were shortlisted by a committee that is made up of both Weald School and feeder Primary School teachers. The books are mostly written by new authors and have been published recently. Titles included Trash by Andy Mulligan; The Mystery of the Clockwork Sparrow by Katherine Woodfine; Dragonshield by Charlie Fletcher; The Fastest Boy in the World by Elizabeth Laird; SMART by Kim Slater; Atticus Claw Breaks the Law by Jennifer Gray and Hamish and the World Stoppers by Danny Wallace.

During afterschool book clubs, students are actively encouraged to read as many titles as possible and then take part in competition categories that have inspired them, these range from designing your own book cover, creative writing, making a film trailer or devising a new character for one of the books.  Andy Mulligan author of Trash came into The Weald School in January and gave a talk to all the Weald Book Award participants about writing the book and the influence teaching in the Philippines had on the story.

Mrs Jane Berry, Senior Year 6 Teacher from one of our biggest feeder school, St Marys C of E Aided Primary School commented "We have thoroughly enjoyed participating in the Weald Book Award this year; it has given us a great opportunity to share books and meet authors. Andy Mulligan's  talk was a particular highlight and the awards evening was inspirational for our pupils. It is a great opportunity for the locality schools to meet with one another and useful as a stepping stone for transition to secondary school. Seeing so many ex-St Mary's pupils presenting books and authors for the final evening made me very proud!”

Winners were announced last week at a dedicated Awards Evening which also celebrates all the entries and book titles. The evening is open to all participating students and their families and we were also lucky enough to have some of the shortlisted authors in attendance.  Jennifer Gray, Kim Slater and Katherine Woodfine who tweeted “A privilege to be part of The Weald Book Award”. There was also a surprise ‘Lifetime Achievement of The Weald Book Award’ presented to a Year 11 student for her active involvement in the Awards since Year 6. 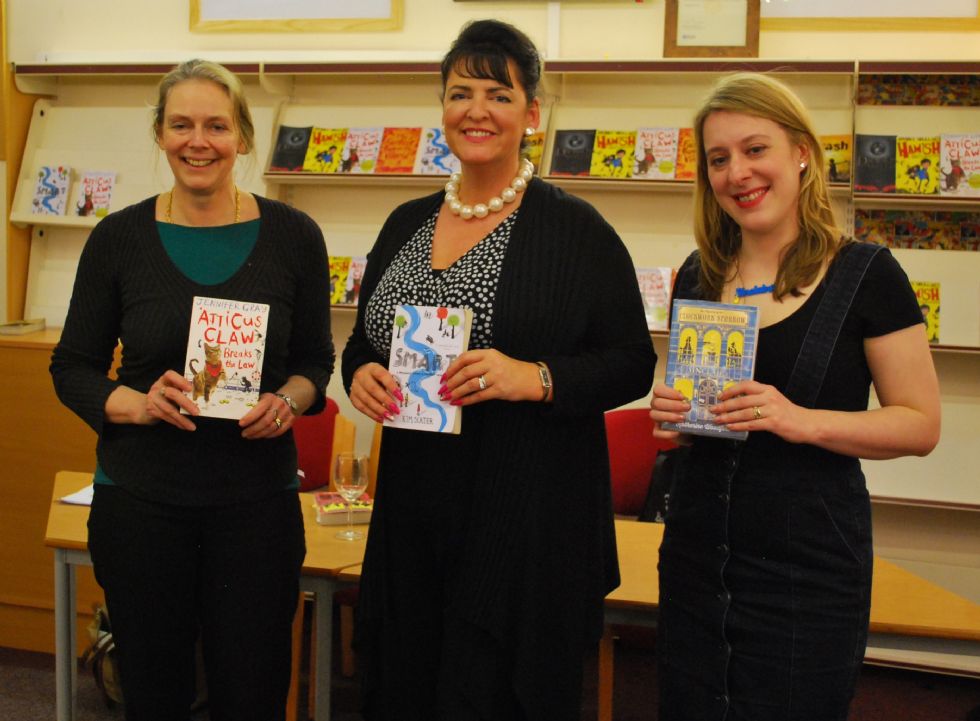 Mrs Jane Fella, Learning Resources Centre Manager added " It was wonderful to see so many students enjoying and being inspired by the shortlisted books. The standard of entries for the competitions was very high and it became quite a challenge to choose the winners.  Thank you to everyone involved especially the authors who were able to be with us on the night. We are looking forward to next year and a new selection of books which we have started work on already."

The Weald Book Award Trophy was won by Danny Wallace for Hamish and the World Stoppers. Danny was unable to attend, but tweeted the following message “woohooooo!! Please thank ALL THE KIDS who voted! and tell them I’m DELIGHTED” We hope Danny will be visiting the us shortly to collect his award.