The Weald School Ski Trip 2014......from Water Jumps to One Direction… 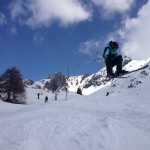 This Easter holidays, fifty Y8 and Y10 students were lucky enough to attend the ski trip to Les Arcs in France.

This Easter holidays, Round fifty Year 8 and 10 students were lucky enough to attend the ski trip to Les Arcs in France. As usual, the trip started with a long coach journey, not that this bothered the students (or Mr Pollard!), as this just gave them ample time with which to consume the incredible amount of food they had taken with them. After a good journey and some questionable film choices from Mr Harris, the group arrived in France in good spirits and ready to ski.

Considering it was the last few weeks of the ski season, the snow fall over the past few months made for excellent skiing conditions. The beginner skiers soon made brilliant progress and were all whizzing down red runs by the end of the second day. Well, maybe not all ‘whizzing’ Mr Cook. The advanced skiers demonstrated their skill and experience by conquering the most difficult of runs with relative ease, as well as the terrifying ‘water jump’ and the intermediate group had plenty of fun falling over!

In addition to the skiing, students took part in a variety of evening activities including pizza night, quiz evenings and even a disco, were there were certainly some impressive moves on show. Every evening there was also a ceremony to award that day’s Skier of the day T-Shirt AND rather fetching ‘Dope of the Slope’ Hi-Vis jacket, which were both to be worn for the entirety of the following day. Whilst the Skier of the day award obviously went to someone who had been impressive on the slopes, the Dope of the Slope award was often more competitive and was won for such impressive feats as ‘getting stuck in a bush’ and ‘crashing in to the most French People’, something that Mr Harris became fairly good at. A new and very popular addition to the awards this year was the ‘One Direction’ back-pack that had to be worn for the whole following day. This was awarded to the skier who had the most problems stopping the day before, essentially only being able to ski in ‘one direction’ (Very witty)

It was a superb week, full of great skiing, plenty of laughs and more than a few high-speed crashes! All the students enjoyed themselves immensely and represented the school with absolute distinction. Thank you to all who attended for such a great week!